Several of our customers use MozyPro as an offsite backup solution, whose programmers apparently have a sense of humor and nostalgia.

While running a backup for a new Mozy user today, I spotted this message while the backup was initializing: 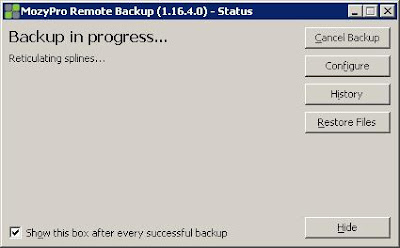 It only stayed up for a few seconds, but I sat and giggled about it for a good minute or two. If anyone remembers the game SimCity2000 from Maxis (the sequel to SimCity, which later spawned the popular game series "The Sims"), the loading screen featured the rumored non-sensical phrase "Reticulating Splines". I'm still unsure if Will Wright actually used splines in the game engine or if it just sounded neat, but the female voice that announced it was entertaining. Since the only references to spline reticulation on the net have to do with extrapolating rendered terrain, it seems plausible that SimCity used this feature.

I'm quiet confident, however, that the MozyPro Remote Backup Client does not. It's always nice to see these little easter eggs though. They are a way for the programmers to talk directly to us, telling a joke that the normal filter of standard user interfaces does not allow.
at January 13, 2010

Email ThisBlogThis!Share to TwitterShare to FacebookShare to Pinterest
Labels: Humor